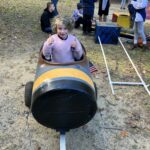 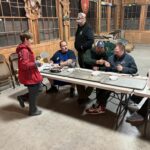 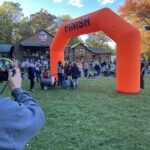 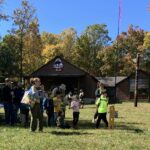 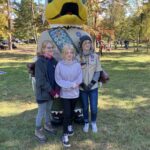 At Apple Harvest 2022, we set up camp, and then headed over to campfire. After an epic demonstration at the campfire, we headed to bed in preparation for the next day!

The next morning, we made breakfast over the campfire, which was “vomit” (scrambled eggs in a bag with added flavors—onions, peppers, etc.) as well as sausage. After breakfast, we cleaned up, and then headed out to do the activities. Our first activity was using the force to balance which involved balancing young Jedis on a wooden board, like a seesaw without it hitting the ground. Team Wickett did ok, had great teamwork, and was able to balance four scouts at one time.

After the using the force, we moved on to the first aid station. During this station, we assessed what happened, Cameron, the ASPL for Troop 3, began the assessment by getting important patient information, we did this to check on a brain injury. Then Trindon, Georgia and Nate applied pressure to a bleeding area, while Caitlin propped the patient’s leg. We also learned how to use the tourniquet and how it stops pressure and how to deal with situations like this.

Our third activity was “Use the Force,” which was teamwork based. There were two boards attached to our feet, and we then had to move together to walk across the lawn. Trindon had the idea to step one board at a time, by moving one side and then the other side. This method worked, and we were complimented on our innovative strategy.

We also participated in the Troop Gateway competition—we originally planned to make Wickett’s home—the ewok that befriends Princess Leia—but due to time constraints we changed it in Chewy’s barbershop. It involved a lot of hay—its best explained by looking at the pictures.

After lunch, and siesta time, we brought our pod racer down to the field, and waited patiently for the pod race to begin. The pod race is best explained by the video, so it’s best to just watch the video!

After the pod race, we had dinner, Trindon made his special desert for the competition, we had some Arrow of Light scouts join us, and we attended the campfire. After a brief service project on Sunday, we received our Apple Harvest ribbon for our flag and our cool patch!

We can’t wait for Apple Harvest 2023: The Highland Games! Bring on the kilts!